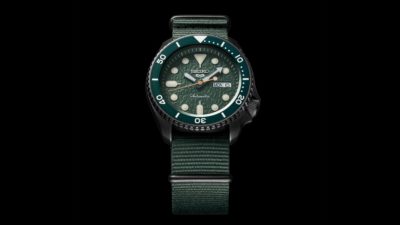 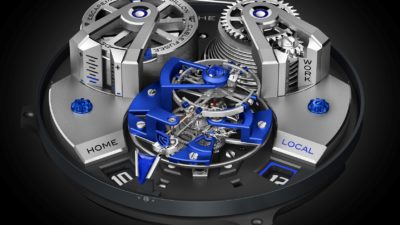 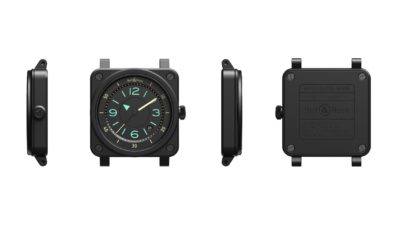 BR 03-92 BI-COMPASS, FROM THE COCKPIT TO THE WRIST 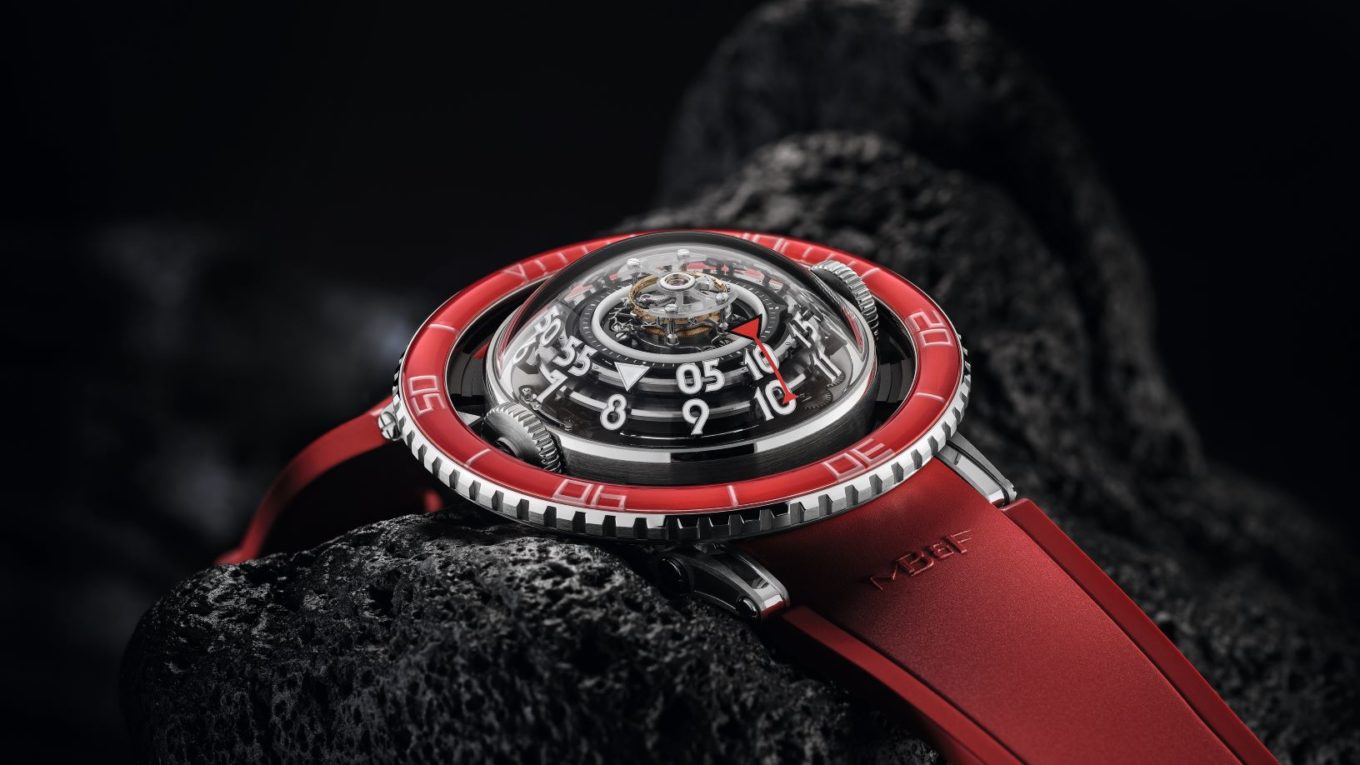 Having captivated the world with its soaring tourbillon and perfect symmetries over the last two years, the jellyfish-inspired HM7 Aquapod emerges from the depths for a new outing in 2019, this time in the most precious of metals and an arresting new shade – along with three-dimensional, “floating” hour and minute numerals

Platinum, which sits at the apex of the hierarchy of noble watchmaking materials, makes its debut in HM7, its bright silvery-white hue an emphatic counterpoint to the vividly crimson unidirectional rotating bezel. Used for the first time in any MB&F creation, red is not a colour that immediately comes to mind when thinking of marine life — but it has a very particular significance when it comes to the jellyfish. 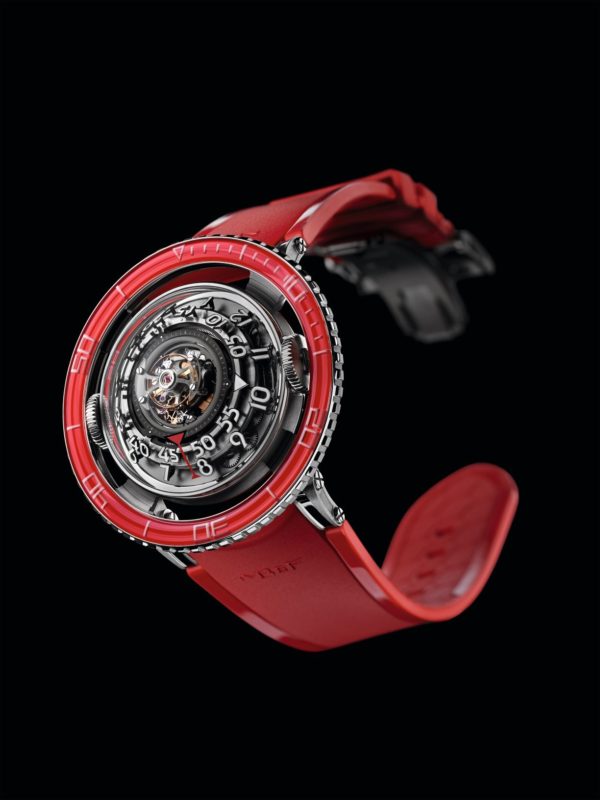 The deeper you go in the ocean, the less colour you see. Red is the first colour to disappear, being on the lowest end of the visible light spectrum and thus most easily absorbed by water. This is why you find a higher concentration of red sea creatures in the deepest waters — being red makes them almost invisible to predators. Deep-sea jellyfish often have red stomachs as a form of protective camouflage, as their transparent bodies would otherwise allow predators to spot them via their stomach contents. HM7 Aquapod Platinum Red comes from the deepest recesses of the horological ocean, with free-floating numerical appendages and unprecedented transparency surrounding its beating heart: a 60-second flying tourbillon. 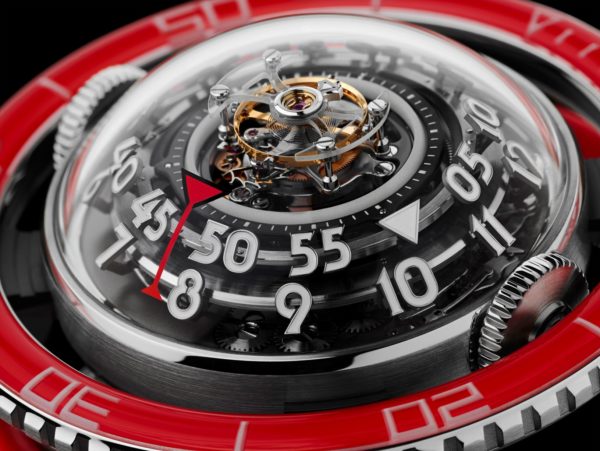 Unlike previous incarnations of Aquapod, which indicated the hours and minutes via rotating rings with transferred numerals, HM7 Platinum Red features three-dimensional numerals sculpted in titanium. The metal was specifically selected for its lightness, in order to have as little additional marginal load on the engine as possible. However, this mechanical advantage came at a cost, since titanium is exponentially denser and stronger (which is to say, harder to machine) than the aluminium that made up the time-indication rings on previous Aquapod versions. 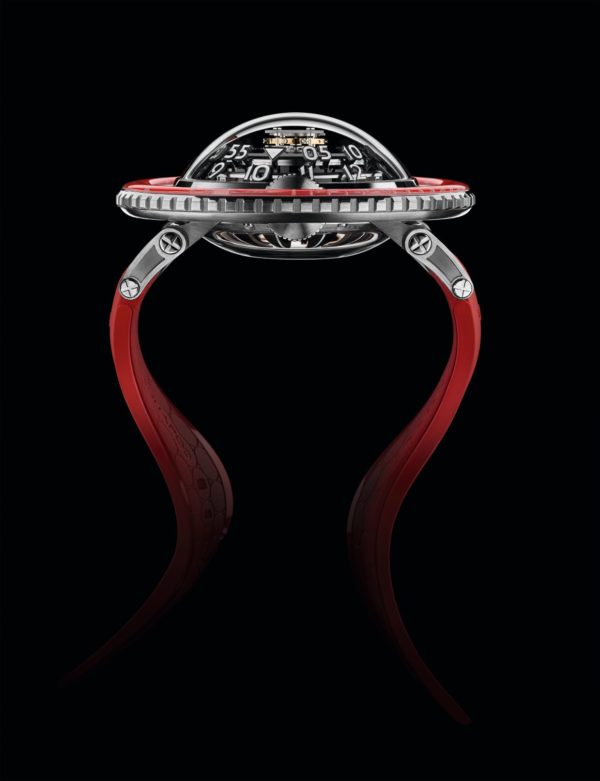 The stems attaching the hour and minute numerals to their respective mounting rings are rendered black with a coating of DLC (diamond-like carbon), completing the ethereal floating effect that one associates with the sight of a jellyfish drifting with the ocean currents. One of the most startling visual aspects of a jellyfish, almost alien in how far it is from the mammalian systems with which we are familiar, is its transparency. How can something so diaphanous and seemingly insubstantial be alive? HM7 Platinum Red homes in on this point, replacing the battle-axe tourbillon bridge of previous Aquapod versions with a clear sapphire component. The flying tourbillon of the HM7 engine is revealed like never before, highlighted by a halo of high-luminosity AGT. 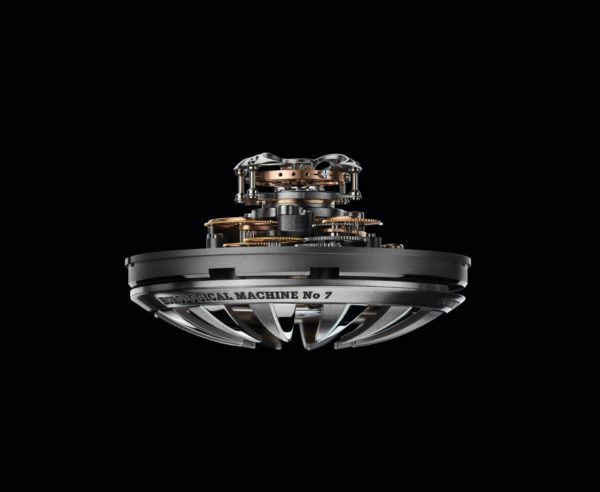 Because, of course, HM7 Platinum Red is aglow with luminescence, just as any fascinating creature of the deep should be. Apart from the AGT ring surrounding the flying tourbillon, luminous material is found in the laser-engraved markings of the unidirectional rotating bezel and on the surface of the hour and minute numerals. These are untinted Super-LumiNova, which fluoresce white after exposure to light. 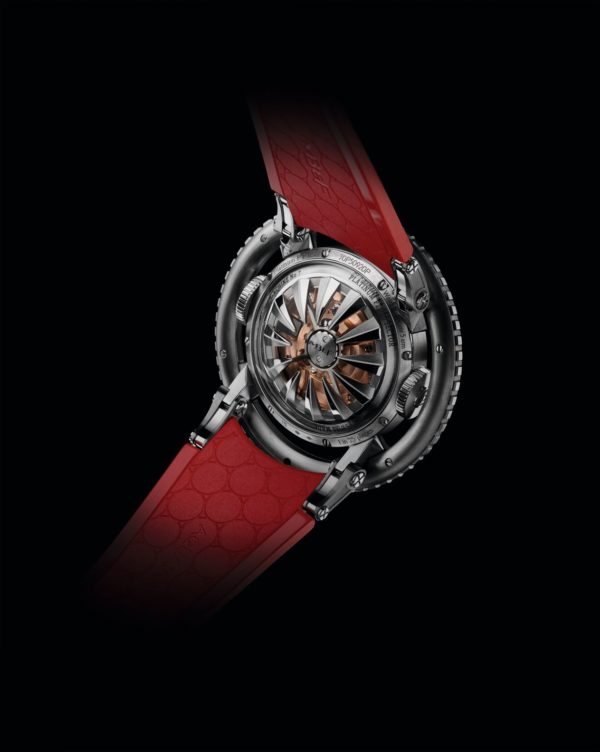 The self-winding, 391-component engine of HM7 Platinum Red was developed entirely in-house at MB&F. Fitted with a platinum case, bezel and buckle, HM7 Platinum Red will be made in a limited series of 25 pieces, each presented with three interchangeable straps (red, white and black) in aircraft-grade rubber. 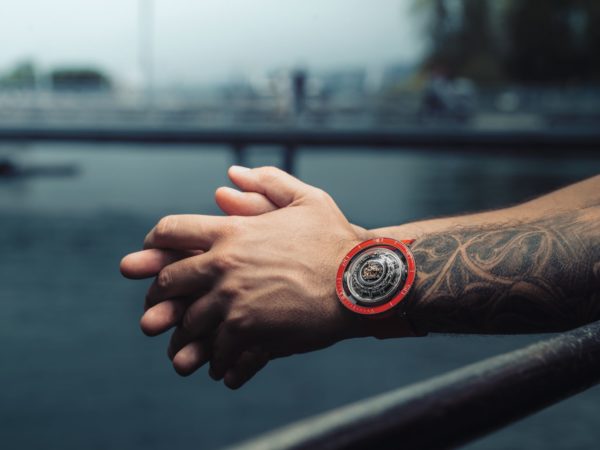 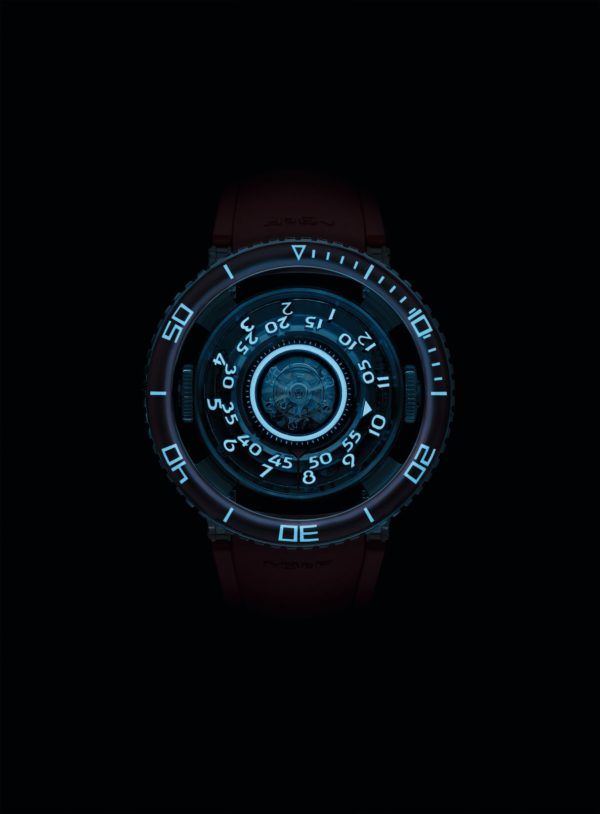 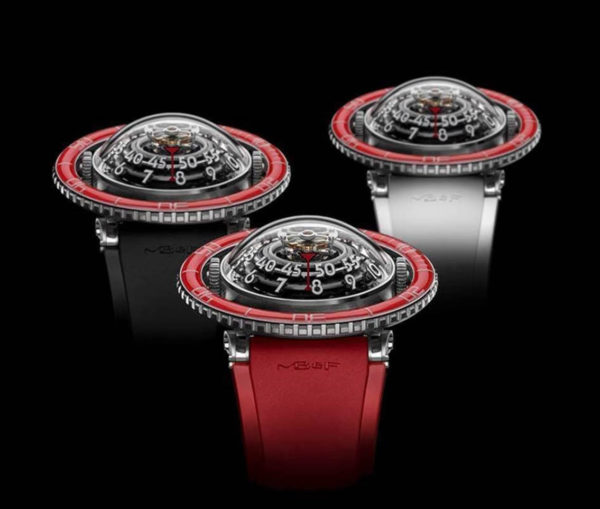 Numerals, markers and segments along the winding rotor in Super-LumiNova

Two crowns: winding on left and time-setting on right