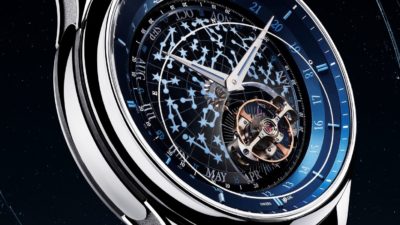 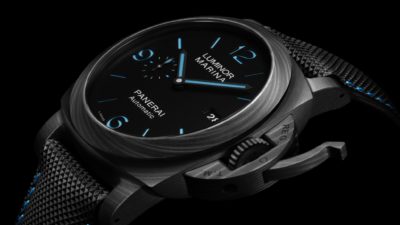 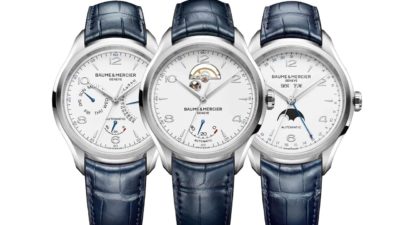 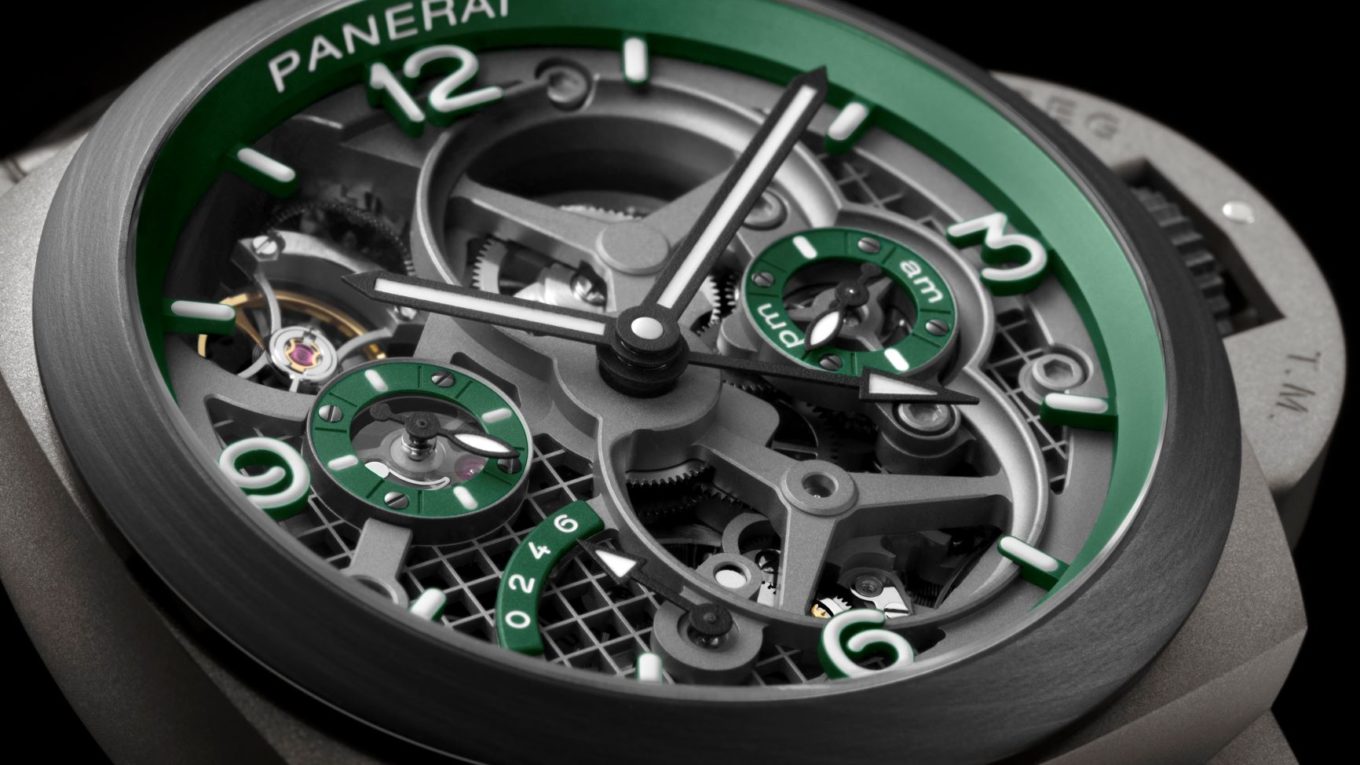 A bold expression of visionary, high quality technical expertise. A tangible demonstration of mechanical evolution. An extreme development of Panerai’s own exclusive language. Lo Scienzato is back!

Its origins are renowned and its history is well known. The first watch of the collection was launched in 2010 to celebrate the 400th anniversary of the celestial observations of the Tuscan genius Galileo Galilei. Through the power of determined innovation, Lo Scienzato has deliberately pushed Panerai’s existing technical and mental boundaries, revealing the electrifying horizons of a new dimension. Today this model, whose mechanics and style have steadily evolved for almost a decade, has returned to the scene, and it is reaffirming its extrovert character through its dominant presence.

Unmistakable, but not unchanged, the new Luminor Tourbillon GMT is revealed today as one of the most challenging projects of Panerai Laboratorio di Idee. Profoundly changed in appearance, the Luminor Tourbillon GMT – Lo Scienziato already forceful personality is now highlighted by a Grade 5 titanium case, with a sandblasted finish and a steeper gradient. It is physical and pleasing to the touch with its raw sophistication. Its impact is enhanced by the visual contrast it makes with the bezel, the crown and the lever of the crown-protecting Safety Lock™ device which are made of carbotech, another material noted for its tangible character and congenial tones. Contrasting with this monochrome spectrum, the military green dial plays an important role. Attracting the eye is the flange encircling the floating numerals, the small-seconds dial, the 24-hour counter and the power reserve indicator. A completely new appearance so far as the dial is concerned.

Sandblasted titanium case formed with DMLS technology, bezel, crown and lever of the crown-protecting Safety Lock™ device in carbotech. Tradition and originality. It is imposing through its innate character, yet light as a result of the technology used to create it. The amazing Luminor Tourbillon GMT is the natural result of the most advanced technologies tested within the Panerai Manufacture in Neuchâtel. Its 47-mm case is made of Grade 5 titanium, a remarkable material because it is polyvalent and tough, has high resistance to corrosion, and is at the same time 40% lighter than steel. But what makes it unique is not so much the physical properties of the metal as the way in which it is created, using 3D printing with Direct Metal Laser Sintering (DMLS); it literally comes into shape from nothing, being formed by the addition of material, rather than its removal. Using original technology, the normal process is reversed. Layer by layer, titanium powder is consolidated by high power fibre optic laser sintering, thus becoming a solid material and forming a shape from nothing. In this process of precision sedimentation, each pass of the laser generates an imperceptible but constant addition, 20 microns (0.02 mm) thick, but most importantly it enables a caseband to be formed which is hollow inside, reducing its weight to a record 18 grams without reducing its strength or water-resistance. The bezel, winding crown and lever of the crown-protecting Safety Lock™ device are all made of carbotech. 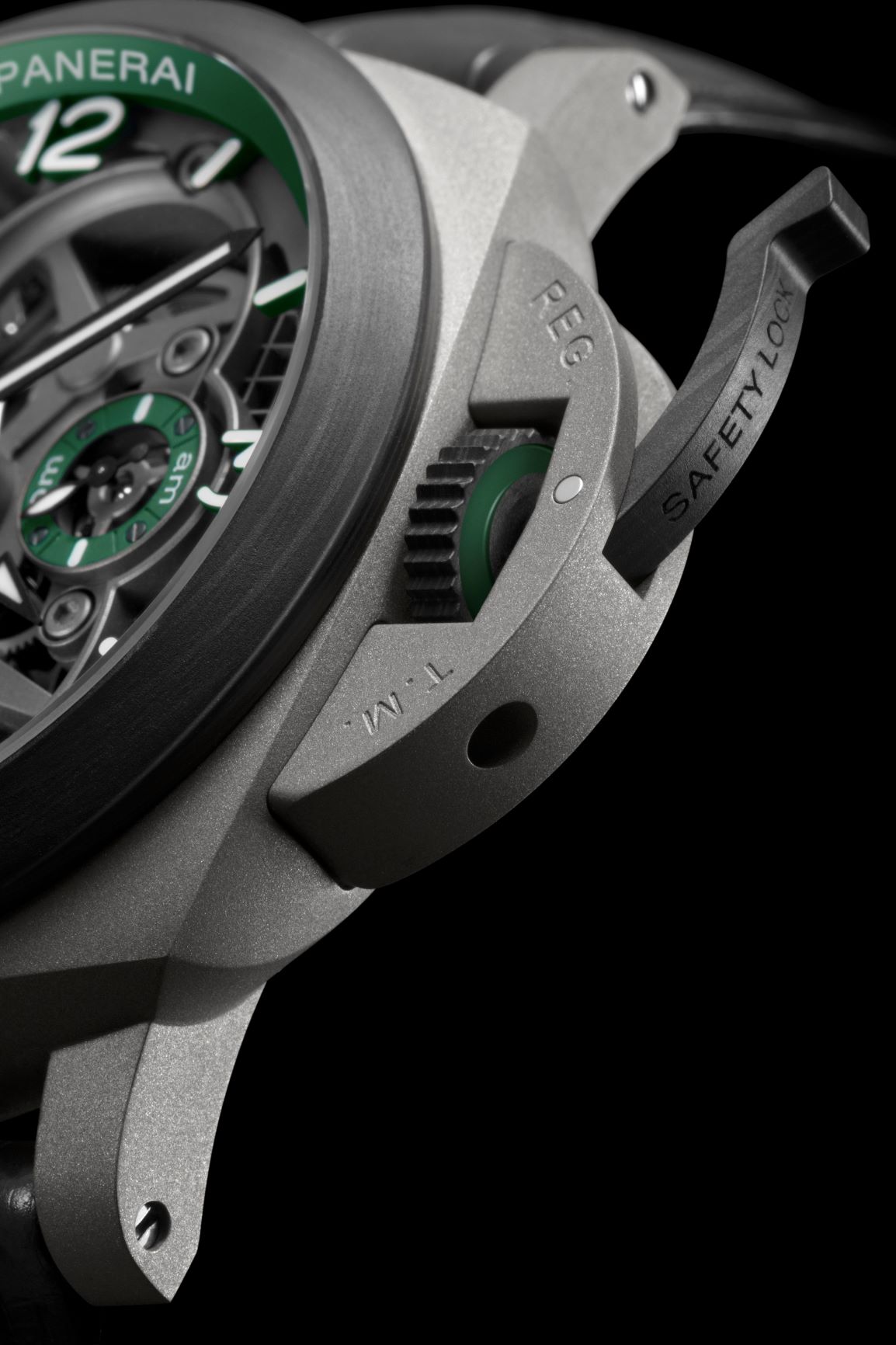 Hand-wound Manufacture calibre with a sophisticated tourbillon. Physically reduced to the minimum in appearance, but not in performance. The powerful identity of the Luminor Tourbillon GMT is immediately and unequivocally conveyed by the P.2005/T calibre within it. A hand-wound mechanical Manufacture movement with GMT function, introduced by Panerai for the first time in 2016, it stands out for its unusual, innovative structure, which had never been used before by the Maison. Mechanical interpretation with steam punk influences are all that remain of the conventional layout of mechanical watch, which has been distorted and intentionally stripped to the bone. The result is a minimalist design with an original, modern approach, including its three spring barrels mounted in series (patented) which provide a power reserve of six days. It too is entirely made of titanium; this has helped to restrict its weight to just 23 grams. The result of Panerai’s expressive power and technical skills, it relies for its performance on a tourbillon device with a cage designed to rotate – once every 30 seconds instead of the traditional 60 seconds – on an axis which is perpendicular to that of the balance wheel. This inspired design, developed not to amaze but to compensate for the effects of gravity on the regulator, results in more even running. The movement has now been further developed to display the power reserve indicator on the front of the watch for the first time, a feature which is extremely useful as well as spectacular. The Panerai Luminor Tourbillon GMT is supplied with a second strap made of black Velcro with charcoal grey stitching and a titanium clasp, part of the kit which also includes a screwdriver for changing the strap and a box made of grey sandblasted cherry wood with the Panerai logo engraved on the lid. 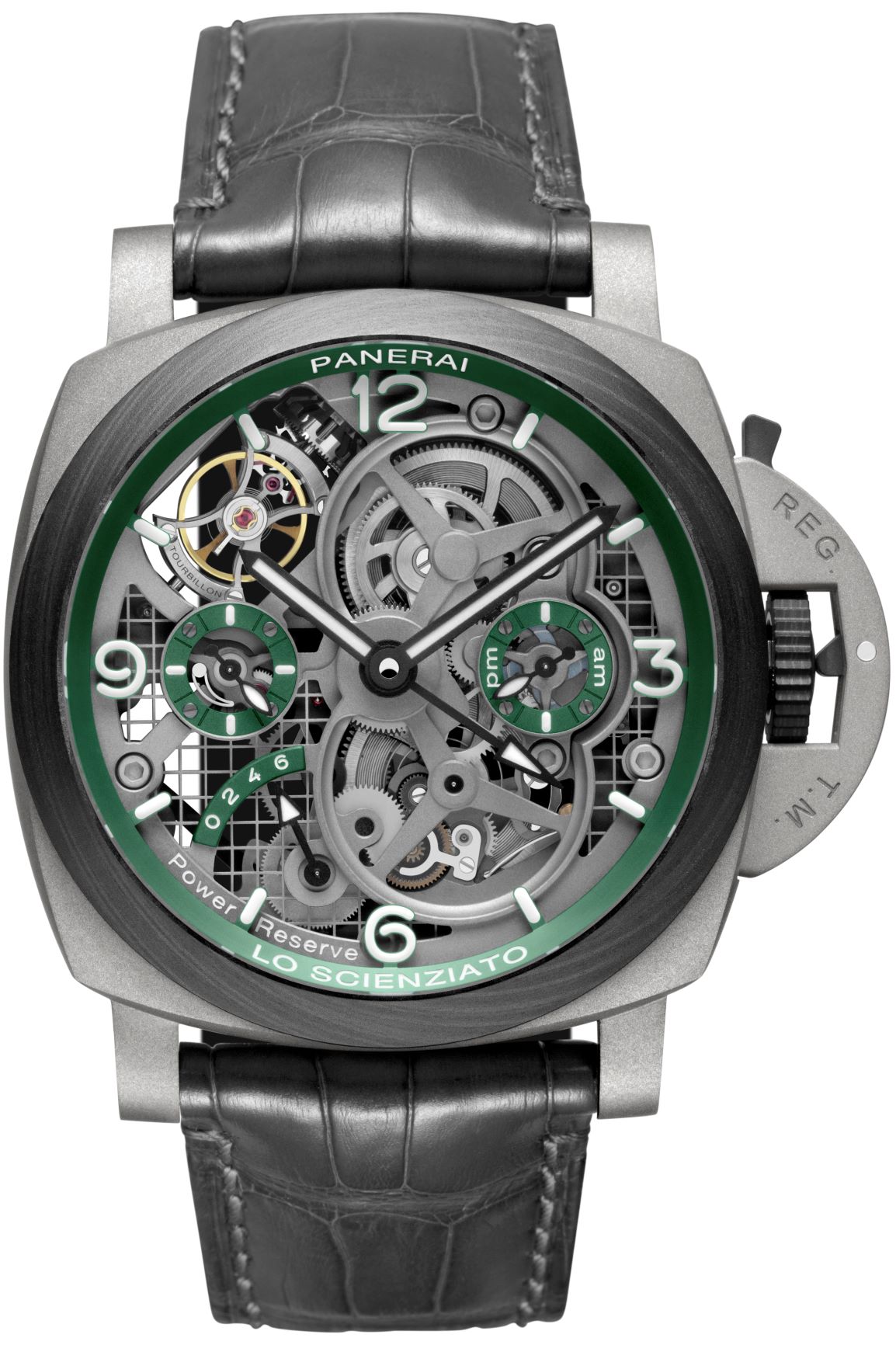 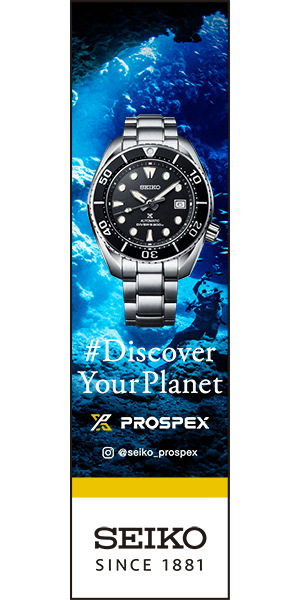 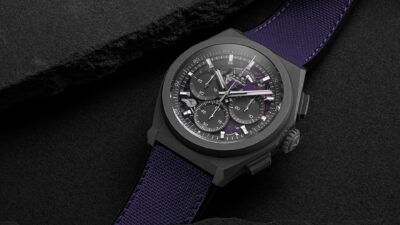 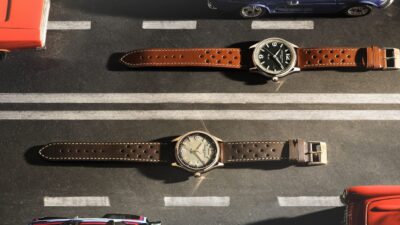 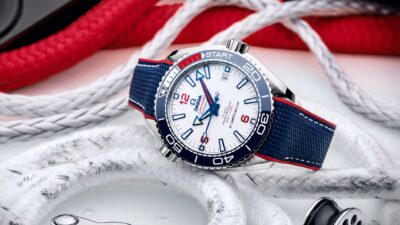 OMEGA – THE OFFICIAL TIMEKEEPER OF THE 36TH AMERICA’S CUP